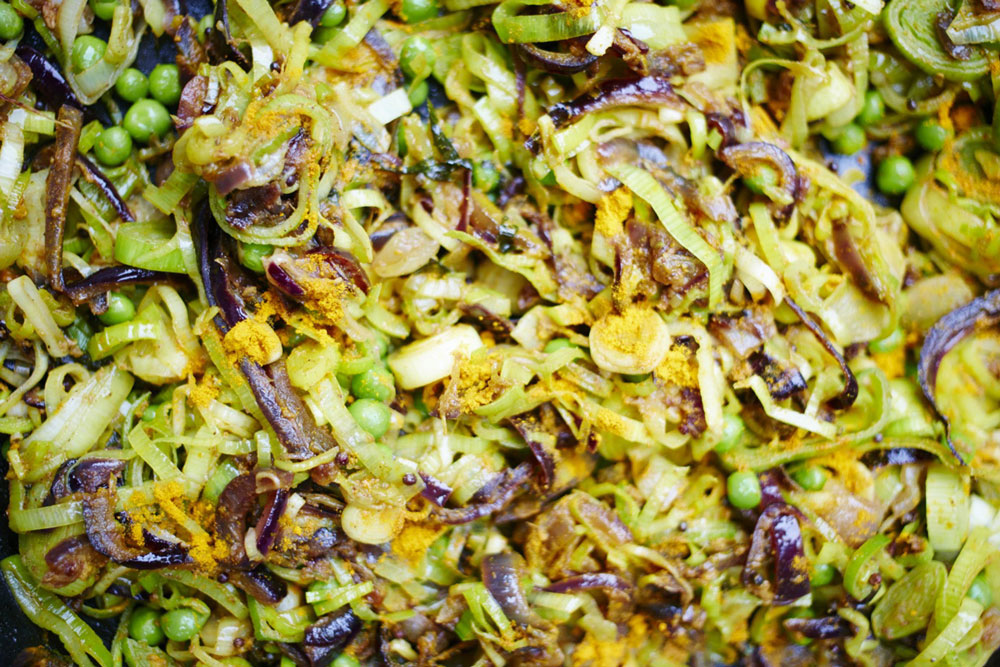 To celebrate nearing St David’s Day, we wanted to share one of our very favourite leek recipes, by Guardian writer Meera Sodha. It looks like a long recipe, but it is a lot simpler than it looks.

Samosas are a brilliant thing to have in the freezer, as they warm and crisp up at a moment’s notice. These hot and sweet tangled leeks work really well as a lighter filling.

Meera’s book Fresh India, where this recipe first appeared, is a favourite in our house.

Wash the leeks well, remove any papery outer layers, then slice into 0.5cm rounds and leave to one side. Heat the oil and butter in a large frying pan and, when hot, add the mustard seeds. When they pop, add the onion and fry for around 10 minutes, until soft and golden, stirring occasionally. Add the ginger, stir-fry for a minute, then add the leeks.

Cook for a further 10 minutes until soft and sweet, then add the peas, garam masala, cumin, chilli powder, turmeric, salt and lemon juice. Mix thoroughly, cook for a couple more minutes, then take off the heat and allow to cool. When cooled a little – just before making the samosas – chop the mint leaves, add to the mix and stir well.

Delicately unroll one sheet of pastry and place on a large chopping board. Brush it lightly with melted butter and layer with another sheet of pastry. Cut the sheets into three horizontal strips (around 10 x 25cm), using a sharp knife.

Make a cone shape at one side of the strip, place 1 heaped tablespoon of the filling inside the cone, then fold the open side of the cone into the rest of the filo strip to cover and seal it. Keep folding over the rest of the pastry around the shape of the cone until you come to the end of the strip. Cut off any excess pastry and stick the strip down with a brush of melted butter. Pop the samosa on a tray and repeat.

To bake your samosas, brush them on both sides with butter, sprinkle with the nigella or cumin seeds if using, and bake for 15 minutes, or until golden and crispy. Serve with cucumber and mint raita or some mango chutney.

NOTE: If you don’t want to bake your samosas straight away, put them in a single layer on a non-stick tray without brushing with butter, then place in the freezer. (You can put them into bags when they’re properly frozen.) To cook from frozen, place in a single layer on a lined baking tray and bake for 20 to 25 minutes, until golden, brushing with melted butter halfway through.