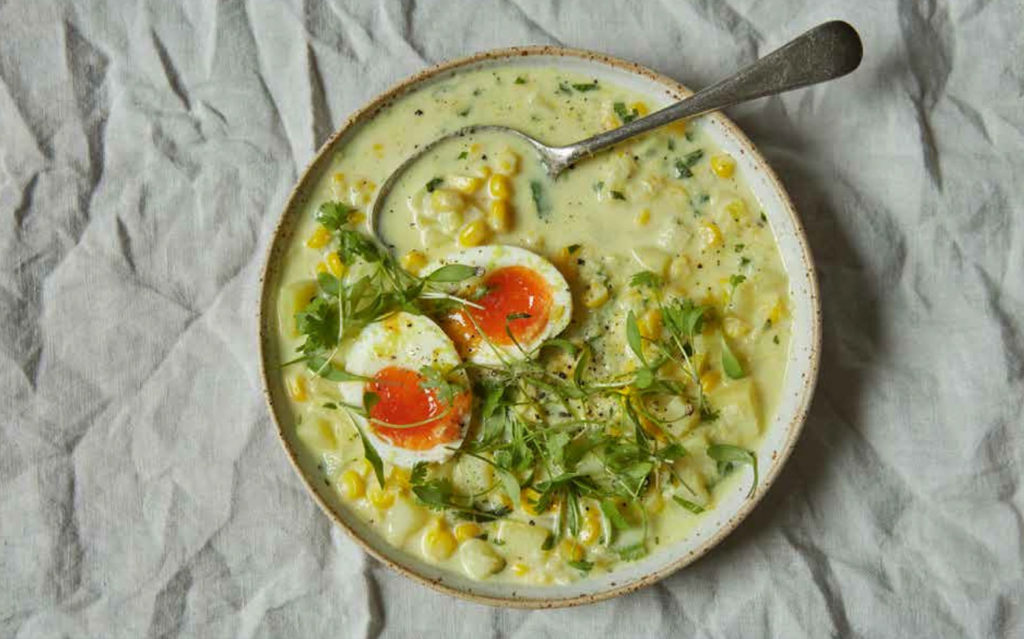 This recipe is from Anna Jones’ new beautiful book The Modern Cook’s Year. From the coldest winter days to the long light summer evenings, it is jam-packed with ideas and  already a favourite on our (laden) book shelf.

“I eat this on early autumn days, when the cold starts to set in, when the jumpers come down from the loft and the fire gets lit for the first time, but there is still some papery husked sweet corn around. This is a dish that feels filling and warming while still having crunch and freshness. The first time I made it, John ate three bowls.

If you can get your hands on it, smoked water is an amazing ingredient; you can buy it from Halen Môn, the Welsh sea salt makers. It’s also great in risottos and stews if you invest in a bottle.”

Bring a small pan of water to the boil, add the eggs and cook for 6 minutes so the yolk is still soft but not runny. Once they are cooked, crack their shells on the work surface so they are easy to peel, then run them under cold water for a minute.

Next put a drizzle of the oil into a large heavy-based saucepan. Once it’s hot, add the leek and garlic and cook for 10–12 minutes, until the leeks are soft and sweet but not browned.

Meanwhile, chop the potatoes into rough 1cm pieces. Cut the corn from its cobs; I do this by resting the base of the corn in a bowl so it catches the kernels as they are cut.

Once the leeks have had their time, add the potatoes and corn to the pan with the stock and smoked water, if you are using it, then bring to a simmer and cook for 15 minutes or until the potatoes are cooked through, and their edges are almost collapsing.

Once the potatoes are cooked, stir in the crème fraîche and lemon juice and half of the coriander and stir to warm them through, then take the pan off the heat.

Serve the chowder in bowls, with the halved egg on top and more coriander scattered over.