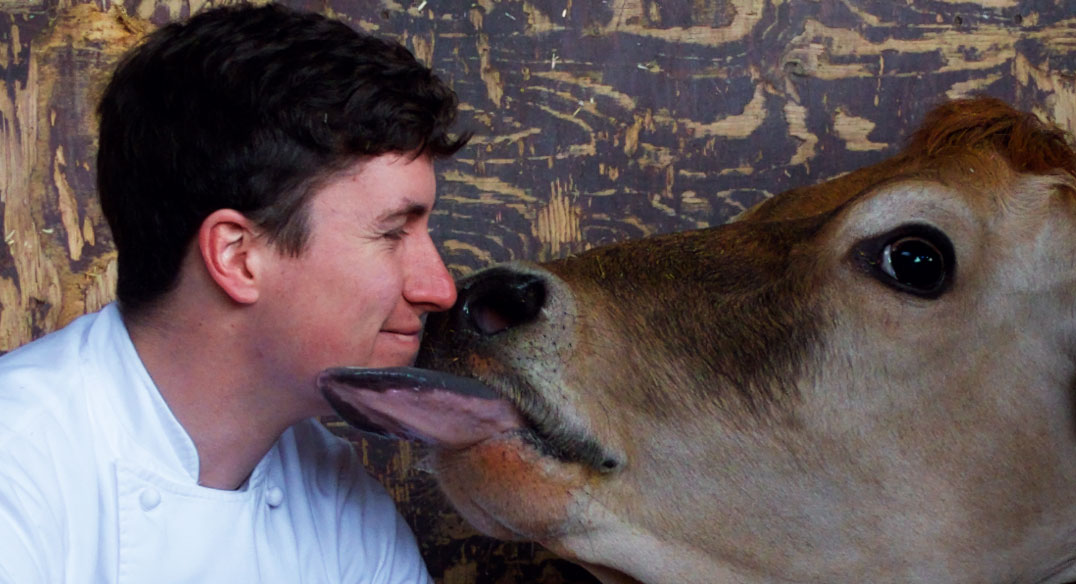 It’s safe to say that Grant Harrington is fairly obsessed with food. More specifically, with butter.  A chef by trade, with numerous Michelin starred kitchens under his belt, he now churns butter five days a week, sells it on day six, and spends day seven cleaning all of his equipment.

But the hard work pays off – his butter is like nothing we have ever tasted before: salty, sweet and deeply savoury, all at the same time. If its possible, it tastes as yellow as it looks, and any restaurant worth its salt buys from him.

Speaking of salt, different chefs order their butter to be made with different seasonings, and we’re pleased to say that Grant is making regular batches with Halen Môn. You can buy his butter from Fortnum & Mason, or from Druid St Market in South London every Saturday. Here, we talk about meatballs for breakfast and the joys of winter.

WHAT WAS YOUR FIRST JOB?
I grew up in a tiny village, geographically pretty much slap bang in the middle of England/Middle Earth. So before I could drive, I gave lessons in guitar, piano, drums and basic music theory, to several younger students at home. Being raised on the pleasure and importance of creativity, music in this case, I think is the main reason I’m at where I am today.

WHO TAUGHT YOU TO LOVE FOOD?
It’s the most cliché sentence a cook can say, but my grandparents inspired me to love food. From the taste of my mum’s mum’s freshly baked lemon drizzle, to my Granddad’s giant jelly filled pork pie, to working as soon as my walking ability would allow me to on my dad’s parent’s allotment. I was in awe at the sheer sourness of the freshly pulled rhubarb (I adored it when there wasn’t any granulated sugar that others liked to dip it into), to the magically pickled onions! To this day there has been nothing more beautifully spiced and pickled than those ones. However, I don’t think you can be taught to love food, though you can be taught to appreciate it. Those that know me, know that I could NEVER leave a plate unfinished.

WHAT DID YOU HAVE FOR BREAKFAST?
Breakfast? I know I should say toast and good butter (salted of course) with an extremely soft egg and black pepper, which it is, sometimes.

However, my thoughts are often on how good last night’s dinner was, so if I can tone down the seasoning, I’ll often add an egg and some freshly cooked pasta to leftovers. House-made meatballs with pasta are an all-time favourite day-starter. Insanely quick and timed perfectly with a strong cup of tea.

WHAT’RE YOUR THREE FAVOURITE INGREDIENTS?
Again butter is such an important staple that I rarely class it as an ingredient, just like salt. But to be vague about having three “favourite” ingredients, I could happily live off of: fresh fish, garlic & chilli.

WHAT’S YOUR FAVOURITE SEASON? WHY?
For sheer beauty, and also influence on all the insanely fresh grass and meadow flowers (which in turn effect cows and all the products produced from them), I’d have to choose spring. But winter comes in joint first, as it often limits our resources, forcing us to be creative with what’s available and challenging us to capture every available delicious aspect.

WHAT DO YOU EAT WHEN YOU GET HOME AFTER A LONG DAY (OR NIGHT) AT WORK?
If it’s past 1am: a pint of unpasteurised milk, straight from the cows outside, and a small amount of really good dark chocolate.

WHAT DOES HALEN MON GO BEST WITH?
Of course I’m going to say my butter. It adds an amazing unprocessed textural quality. It’s also pretty great just to dip fresh garden radishes into, and it reminds me of where it’s from; that beautiful welsh sea, where I surfed and swam as a kid.

WHAT MAKES THE DIFFERENCE BETWEEN A GOOD PLATE OF FOOD AND AN AMAZING ONE?
Ingredients. It’s not a forgotten fact, it’s just an unappreciated one. A dish can only be as good as the ingredients used to produce it.

WHAT’S YOUR FAVOURITE SMELL?
Meadowsweet and the smell of mountains at altitude, they can’t really be mixed in reality.

WHAT GETS YOU UP IN THE MORNING?
Bobby, my Dog, otherwise he’d bark until the house fell down.

WHAT’S THE MOST UNDERUSED INGREDIENT?
Cucumber. It’s too delicate in flavour for me as it is, and not in a good way like a fresh scallop. It has to be salted or better, pickled or fermented.