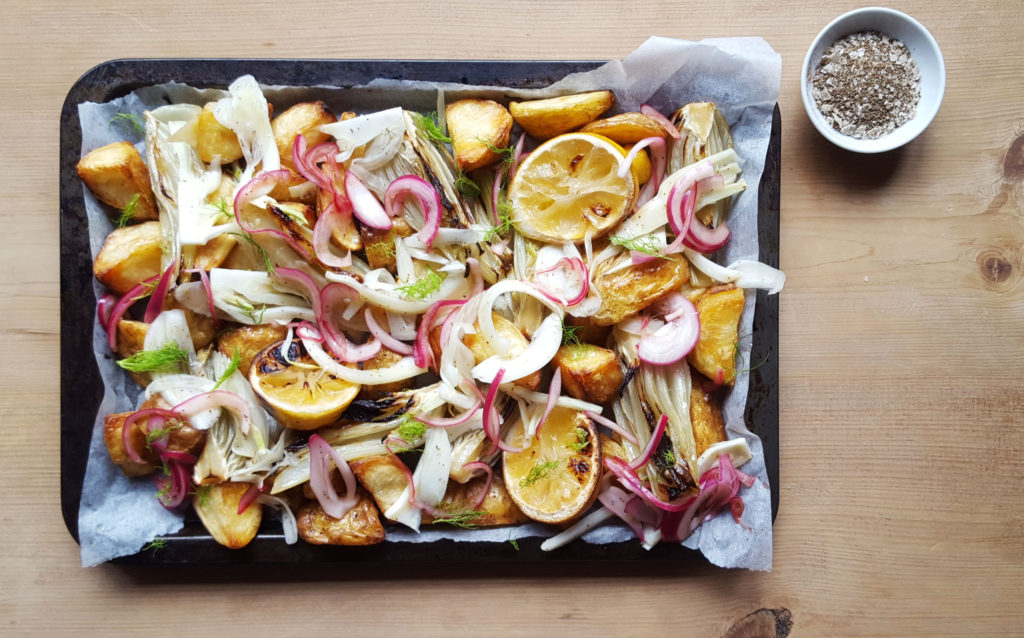 Perfect with white fish or instead of a mayonnaise-laden potato salad at a summer BBQ. The super quick celery salted pickles add variety and crunch to this very pretty dish.

Scrub the potatoes, but leave the skins on and cut into even sized chunks, roughly into 6 pieces per potato if they are large or quarters if small.
Place in a cold pan of salted water and bring up to the boil. Allow them to blip away for about 10 mins until they’re just starting to soften. Drain in a colander and shake them around to fluff them up a bit.

Meanwhile, get on with your pickles. Using a very sharp knife, make long, thin slices from the root to the tip of the red onion half. Separate the pieces in a bowl and pour over half the vinegar, the juice of half a lemon, 2 tsps of the celery salt and half the sugar. Mix well with your hands and set aside.

Pick the greenest fronds from the top of the fennel and keep to one side, discarding any that have starter to discolour. Cut off the tough tops of the fennel bulbs and cut them into four wedges lengthways.

Take two of the fennel wedges and cut into long, thin slices, similar to the onion and mix with the rest of the salt, sugar, vinegar and the juice of the other lemon half. Mix well with your hands in a different bowl and set to one side with the red onion pickle.

Take two roasting trays and put the potatoes in one with a good glug of olive oil and a generous scattering of celery salt. Place in the centre of the oven.

In the other tray, mix the remaining fennel wedges with another glug of olive oil, the halves of the other two lemons and a pinch of celery salt, cover with foil and place in the bottom of the oven. Roast for 35 mins. Once the timer has pinged, remove the foil from the fennel, and mix with the potatoes and lemons in the potato roasting tray. Roast for a further 10 mins.

To serve, arrange the fennel, potatoes and lemons on a platter. Drain the liquid from the pickles and squeeze well to remove any remaining sharp vinegar flavour. Scatter them evenly over the roasted vegetables and dot the reserved fennel fronds over the top.