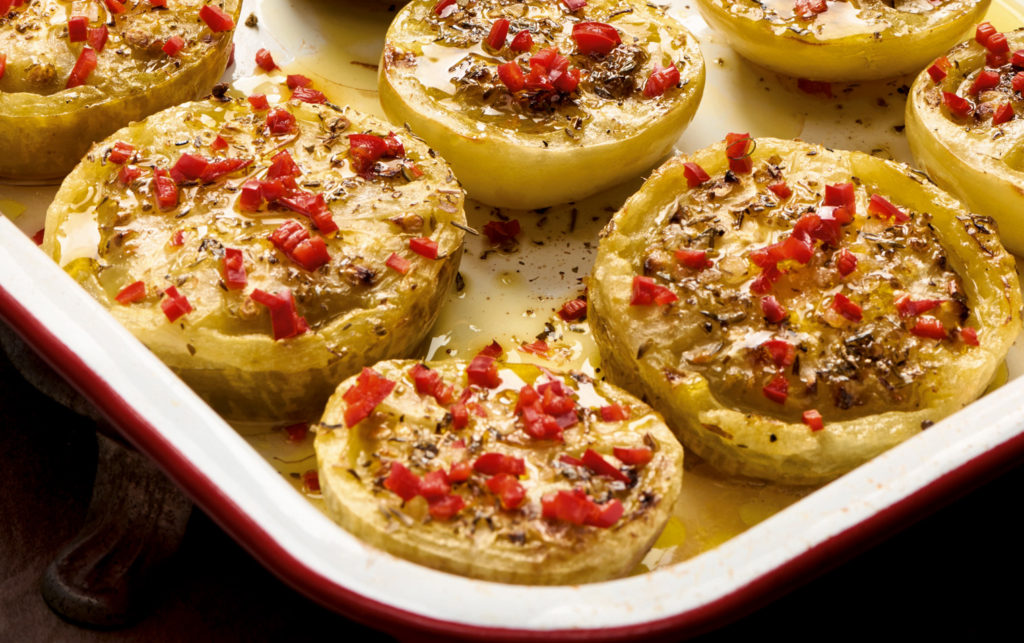 On the Side , Ed Smith’s first book, is what he calls a ‘sourcebook for inspiring side dishes’ and it is just that – moving the often forgotten accompaniments to centre stage and giving an exacting amount of detail to make cooking them as easy as possible. Here, he shares a deliciously versatile recipe which calls for the very best sea salt. We could also see it working nicely with some our Pure Sea Salt Smoked over Oak, too.

Although I enjoy roast or pan-fried cherry tomatoes, to my mind (and I think the minds of others too), large red tomatoes are only acceptable if cooked to absolute perfection (caramelised, blistered, fully soft) and placed next to bacon, sausage and black pudding; but otherwise: no thanks. Green tomatoes are a better option. You’ll find sharp, hard, unripe green tomatoes as well as softer, more subtle heirloom varieties in the shops. Both seem to enjoy a little heat from a grill, as well as the complementary seasonings of dried oregano, chilli and nutty rapeseed oil suggested in this recipe.

I like to eat warm, yielding green tomatoes with things like grilled fish (salmon, mackerel, sardines, cod) and cheeses like ricotta and halloumi; basically, they’re juicy and luscious and are effective at cutting through savoury and salty foods without hogging the limelight.

Preheat the grill to medium-high. Cut the tomatoes in half widthways (rather than from stem to tip). Place each of the halves on a small baking tray into which they all fit snugly, cut-side up. If they don’t sit flat, slice a tiny bit off the other end so that they do. Drizzle and slick the tomatoes with 2 tablespoons oil. Sprinkle them with a little pinch of white pepper, a bigger pinch of salt and a scattering of dried oregano.

Place under the grill about 8–10cm from the heat with the oven door ajar. Cook for 8–12 minutes, during which time they’ll sizzle and spit, soften and sink a little (but not totally), and dry out a touch on top. Soft, ripe tomatoes will take less time than harder, unripe green tomatoes; you’re looking for the flesh to sink a little, the outer skin to start slipping and the tomato to be tender but still hold its shape. Remove from the oven, drizzle each with more oil, add another sprinkle of salt and top with the diced red chilli.

This recipe is taken from  On the Side, which is available online and in all good book shops.