A Panad with...Michael Zee of Symmetry Breakfast - Halen Môn
0 Items
Free postage when you spend £50 in the UK 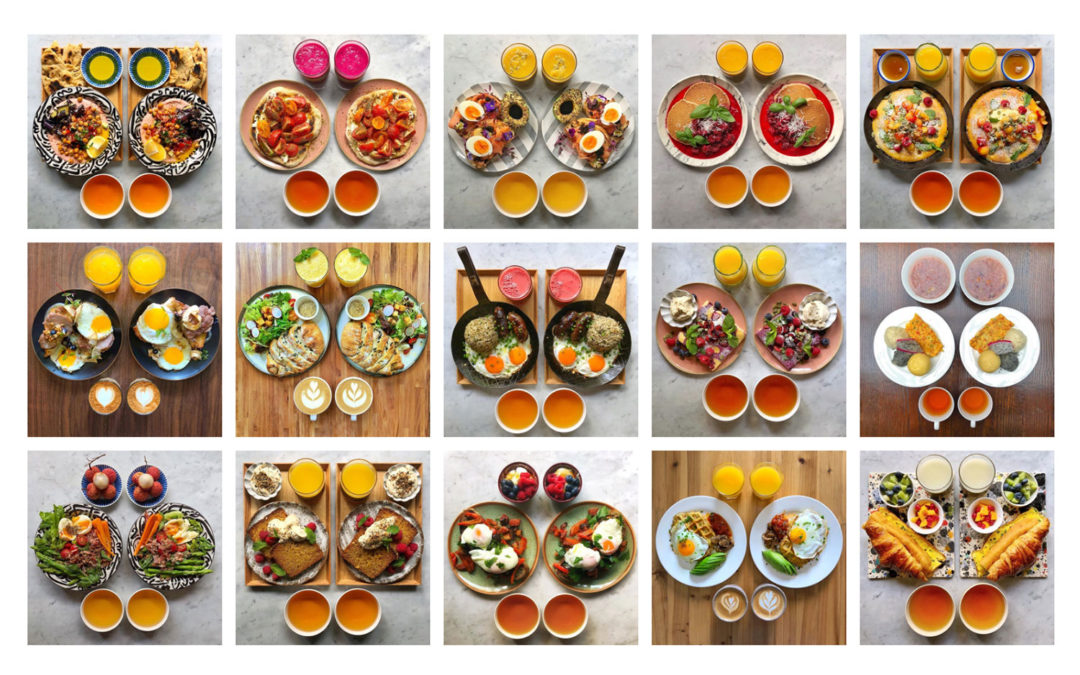 When Michael and Mark were first together, Mark was working long hours and breakfast was the only meal they would be sure to share. It’s fair to say that what started as a way to enjoy quality time together has turned into a worldwide phenomenon, and now we, along with 750k others, look forward to seeing what Michael has cooked every single morning on his instagram account Symmetry Breakfast.

Whilst the photographs are always beautiful, Michael’s food goes beyond aesthetics – it’s delicious, well-researched and unbelievably diverse. With a book in several languages under his belt and his social presence still growing, we are looking forward to what he does next. Here we chat chip butties and the emotions surrounding food.

WHAT DID YOU HAVE FOR BREAKFAST THIS MORNING?
I made a pannukakku, a baked pancake from Finland that is normally dotted with fresh summer fruits.

WHAT’S MARK’S FAVOURITE BREAKFAST?
When I met him, it was Eggs Benedict and we would go out for breakfast every weekend.  He is also partial to hagelslag on buttered bread, a childhood favourite from the Netherlands where he is from.

WHAT’S THE MOST UNDERUSED INGREDIENT?
I think dried herbs have had such a bad rep for many years, they’re not comparable to fresh of course but they are useful for things like marinades and rubs. Dried mint is warming where fresh is cooling.

YOUR WORST KITCHEN DISASTER?
Probably when I was about 9 years old, I was cooking with my sister. We were making a baked pasta dish and really experimenting. I have no idea where our parents were but somehow a huge amount of ground cinnamon went in. We both ate it rather than admit failure.

YOUR STRONGEST CHILDHOOD MEMORY AROUND FOOD?
I grew up in Chinese chippies in Liverpool, my grandfather was from Shanghai and he really catered to the local tastes, he cooked Chinese food for a British palate. I remember working in one restaurant in particular on Finch Lane in Huyton almost everyday after school until I was about 15. With my two brothers and sister we would help take deliveries off lorries. Potatoes, fresh cod and sausages and pies were the most memorable ones because the men that delivered them knew us all!

WHAT DOES HALEN MON GO BEST WITH?
Chips or buttered bread, keep it simple. OR A CHIP BUTTY!

WHAT’S THE BEST SMELL IN THE WORLD?
Rotisserie chicken, especially when they have potatoes at the bottom like in France.

ONE TIP FOR MAKING YOUR FOOD LOOK GREAT ON CAMERA?
Make it look great on the plate first! Putting care and attention into something shows massively.

YOUR ACCOUNT HAS ¾ MILLION FOLLOWERS – WHAT DO YOU PUT YOUR AMAZING SUCCESS DOWN TO?
Consistency and research. I do so much reading and research but rarely does my inspiration come from contemporary cookbooks (which I do love to cook from) and where I can’t find things in books, I ask a lot of questions. You’d be surprised at what you can find online if you know how to ask the right question.

AND FINALLY, WHAT MAKES THE DIFFERENCE BETWEEN A GOOD PLATE OF FOOD AND AN AMAZING ONE?
It’s all about emotion. It directly influences us when we are on holiday, the time and place of having a bowl of pasta in Italy, a warm summer night where your chilled wine just tastes so good. Bring that exact dish back home and it might evoke the memory, but it won’t be the same.